The Hangar filled up the most it had all season long for the final home game of the season, the second leg of the play-off quarter final between the home team Slough Jets and the visiting Milton Keynes Lightning

Having played each other the previous weekend and 24 hours earlier both teams knew what each other was about and a tentative start saw most of the first period pass by before any entries to the gamesheet but it was the home team that broke the deadlock at 18.11 when Joe Greener made it 1-0.

Slough killed off a massive set of penalties early on in the second period and while penalty killing Adam Calder stepped forward to make it 2-0 with a shorthanded goal at 27.50. Slough’s dream game continued when Darius Pliskauskas scored at 32.11 to make it 3-0 and level the series on aggregate. The final 7.49 of the middle period passed with no further scoring setting up a phenomenal end to the game.

It took just 27 seconds for Slough’s Dan Davies to score in the third period, making it 4-0 and taking the lead on aggregate. Milton Keynes finally scored at 43.53 through Matt Towalski to level on aggregate and when Adam Brittle scored at 47.14 despite Slough still leading the game the visitors re-took the lead in the series. Adam Calder scored at 53.22 with a powerplay goal to level up the aggregate score and Davies scored a second at 55.17 to put Slough back ahead. The home team looked to be on their way to Coventry until referee Dave Cloutman awarded a penalty shot at 59.42 to the visitors as the net was moved off it’s moorings and Blaz Emersic scored against his former team to send the game to overtime despite the 6-3 scoreline.

There were some big chances at both ends of the ice in overtime and the 4 on 4 extra space seemed to appeal to both teams. The extra period passed by without any penalties being called and just after the announcement of the final minute of overtime the game ended when Mindy Kieras netted the winning goal at 64.06 to secure the final place at the play-off weekend for the home team.

Play-off ¼ Final action returned to Slough for the second leg with the now home team carrying a 2 goal lead into the game from the first leg.

Slough Jets 0 Peterborough Phantoms 3
After Overtime
As with the previous night the first goal of the game came on the powerplay with Peterborough scoring via Jeff Glowa at 3.24. At the other end of the period they had the game level on aggregate at 15.15 when Maris Ziedins scored a shorthanded goal and the period ended 0-2. 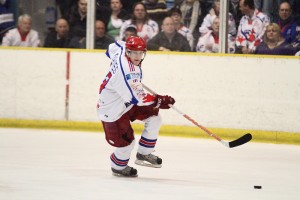 The middle period passed by with no further scoring and the teams took the second interval level on aggregate again. The third period again also failed to separate the aggregate score and regulation time ended at 0-2 meaning overtime was needed.

Slough started overtime forcing Stephen Wall to make a couple of saves but the first shot the visitors got in the extra period saw Tom Carlon score and secure a play-off place.