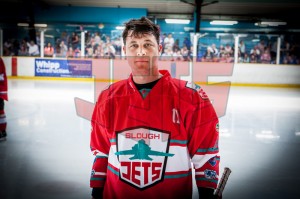 Many of the earlier Jets came from Richmond and James Nesbitt didn’t change that. His career started at Richmond but his signing to Slough came after a season at Stevenage. He played three seasons in the mid 90s for the Jets from 1993-96. He was a good two way player with good offensive and defensive skills. He was known for his penalty killing and was consequently one of the team’s go to penalty killers in his time. He played 78 Jets games, scoring 10+14 with 45 penalty minutes.