After conceding a two goal advantage on the home game Slough Jets made the journey to Milton Keynes to play the final game in the Lightning home rink before it’s major refurbishment.

After 200 seconds Aaron Connolly reduced the deficit on aggregate by half as he beat Stephen Wall and gave the visitors a 1 goal lead on the night. Gregg Rockman faced just 5 shots while his opposite number faced 14 but at 17.10 Milton Keynes lost an import after Blaz Emersic was awarded a match penalty for check from behind which was later downgraded to a game penalty.

Despite Slough hitting penalty trouble in the third period the home team still failed to score, including taking their time-out at 57.12 but just 8 seconds into the overtime period Adam Carr scored to complete the game 1-2 but more importantly send his team to Coventry.

The final game of the regular season saw Milton Keynes and Slough swap home venues with the Jets hosting the Lighting at the Hangar.

Slough’s Player/Coach Doug Sheppard opened the scoring at 7.30 to give the home team the lead before Nigel Boniface called the game’s first penalty, a 2+10 checking from behind call on Alex Symonds. Milton Keynes levelled the game at 14.02 when Michael Wales struck and 5.49 later made it 1-2 when Leigh Jamieson scored.

The second period saw powerplay opportunities for both teams but it was at even strength that Jamieson extended the lead at 36.02 with the middle period’s only goal. 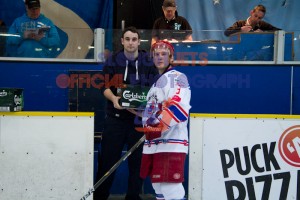 The third period saw the teams continue to battle away with Slough outshooting Milton Keynes but with just 4 seconds left in the game Doug Sheppard scored Slough’s second goal setting up a tense final few seconds. After the home team took took their time-out the final four seconds played out with Milton Keynes holding on for the win.

Slough Jets finished the regular season with a road trip to Milton Keynes Lightning looking to complete a 6-0 season sweep.

Milton Keynes Lightning 3 Slough Jets 4
After penalty shots
The home team scored the first goal of the game at 8.58 when Leigh Jamieson netted and held the visitors down to just 5 shots on Barry Hollyhead meaning they retained the single goal advantage at the first interval.

Slough managed more shots on Hollyhead in the second period and condequently got themselves on the board but not before the home team had extended their lead. Lucas Zatopek scored at 24.13 and Gary Clarke made it 3-0 at 24.50 but Doug Sheppard sparked life with a shorthanded goal at 33.08 and was followed with an even strength goal from Shaun Thompson at 38.18 to end the period with just a goal between the teams.

2.35 into the final period Slough levelled the game when Shaun Thompson scored a second goal and the teams battled out the remainder of regulation time with no further scoring.

Five minutes of sudden death overtime failed to separate the teams and the game went to penalties. The home team shot first but as all three of their shooters failed to score when Darius Pliskauskas netted for the visitors it gave them the extra winner’s point