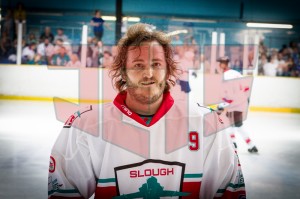 Barry made his Jets debut 1 year after his sibling, Ricky, and he played for two senior seasons at the Hangar. His second season was a full season with the senior team and from there he moved to complete his career with Haringey Racers/Greyhounds. He played 30 games, scored 0+3 for 4 penalty minutes. Since hanging up his skates Barry now runs Skene Design.