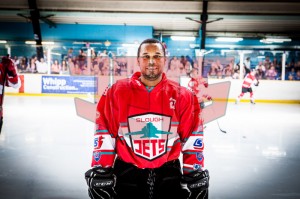 Norman Pinnington is a name well known to fans of ice hockey up and down the country. Norman has continued to play the game up until as recent as 2012 with Streatham Redskins. Norm’s first Jets appearances came in 2000 and he stayed until 2003. A year in the Elite League was followed by Norm’s return to Slough and he played his final game for the club in 2006. His reputation proceeds him in the hockey world, he is a strong, no nonsense forward who plays the game hard. His physical edge no way took away from his offensive skills as he averaged nearly a point per game for the Jets. He takes no nonsense on the ice but enjoys a good laugh off the ice. He is also a former club Captain. Norman played 111 games, scoring 37+71 and picking up 408 penalty minutes.