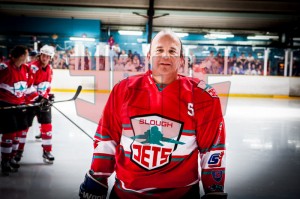 Scottish born defenceman Robbie Henderson started his career at Ayr Bruins and made his way to England via Telford. He gradually moved further south and landed at Slough where he played for the Jets between 1991 and 1993 with 45 games played, statistics of 0+6 and 57 penalty minutes. Robbie returned North of the border and played with Paisley Pirates until as recently as 2013/14.