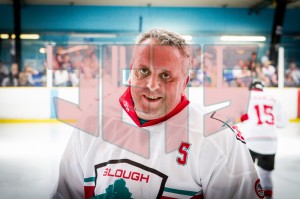 Brian played for the Jets for three seasons 1990 to 1993. Originally from Kirkcaldy, Fife – Brian was a product of Kirkcaldy’s Junior Development program. Upon moving to London, Brian played a season with Lee Valley Lions before joining the Jets. Brian gave up hockey to focus on his career which required a lot of international travel and finally made a permanent move to New York in 2001. He lives in Stamford, CT where he still plays men’s league and is highly involved with youth hockey development as a board member, coach and USA Hockey association representative. Coincidentally, Brian works alongside former Jets goalie Tom Wills. Brian played 75 games, scoring 3+3 and picking up 12 penalty minutes.