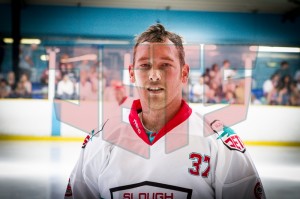 Richie Hargreaves is the driving force behind the Bristol Pitbulls. He is the player coach for the NIHL side which he founded in 2009 taking the team from strength to strength, even overcoming the adversity of their home rink closing. He came to Slough firstly for two games in 2004/05 but signed for the entire 2007/08 season after spells in the EPL and EIHL. After leaving Slough he spent a year in Oxford before founding a club for his home town. Richie has played 38 Jets games, scoring 9+17 for 48 penalty minutes.