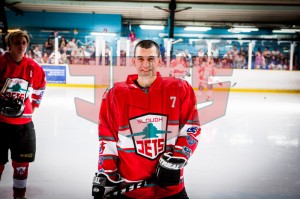 Stepping up from the old days is Paul Watkins who is an original Jet.  Recruited for the inaugural season in 1986/87 he played three seasons with the Hangar as his home before retiring from the sport.  Since retiring Paul has settled down and is now a family man, he’s excited to be involved in the game as having spoken to his children about his hockey it will be the first time they will get to see him play the sport he loves.  Paul played 73 games, scored 8+9 and was penalised with 55 penalty minutes.