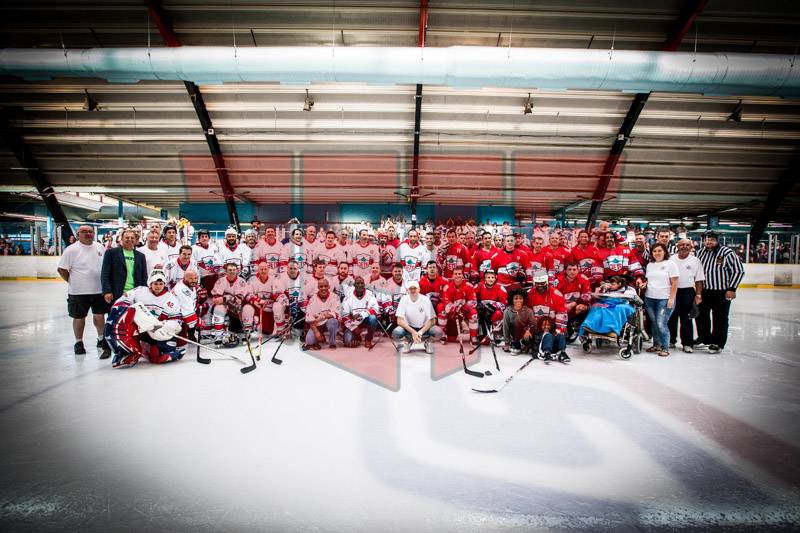 With all but two payments now due the Slough Jets Legends are pleased to confirm the funds raised from the Legends Game held at the Hangar this summer.

Following the news that professional hockey had come to an end and the once proud name of Slough Jets would now continue solely in the fourth tier of hockey, the development NIHL Division 2 league the Legends organisers committee arranged a “Goodbye” testimonial game raising money for two great charities.

Players from the Jets 28 year history all gathered together on the Hangar ice to give a great afternoon’s entertainment followed by an evening of eating, partying, presentations and raffles.

Once all the monies from tickets, shirt auctions, sponsorship has been counted up and all the bills paid the total amount raised for the two charities is £4230.

The money raised will be split between the two charity partners, Special People On Ice and the Lymphoma Association and with the monies already transferred to both we wish them well in continuing the valuable work they do.

SPICE make skating and ice hockey accessible to those with additional needs from their base at Absolutely Ice. They run weekly sessions on Sunday mornings and more can be found on their website at www.spiceskating.org

The organisers, Craig Moran, Tammy Moran, Gary Stefan and Mark Denholm would like to thank everybody who was a part of a fantastic day and who made it possible to make donations to these two fantastic charities. Thanks to the players who gave freely of their time, the Absolutely Ice management, the Copthorne Hotel and all the volunteers who worked on the day of the game as well as the fantastic Jets fans who bought tickets, shirts, DVDs and more.