As word of the Slough Jets Legends game spreads more and more people are getting involved and today we can announce six more legends that Gary Stefan and Craig Moran have recruited for the July 19th game at Absolutely Ice. 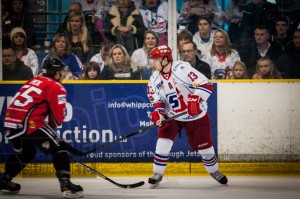 The first player announcement of the day is Dan Davies. The 5’9 forward graduated from University last year but despite the pressures of studying Dan has forced himself a reputation as one of the best forwards in the league. A go to man for face-off wins Dan’s skills have grown season on season. He joined the Jets in 2009/10 from Bracknell and has been one of the first players that coaches have wished to re-sign ever since. For his last two season seasons at the club Dan wore the “A” on his jersey. He accepted the responsibility of anchoring the top lines in his stride, creating one of the most potent forward combinations in the EPL. Dan played 240 Jets games, scoring 72+169 and picking up just 46 penalty minutes.

Stepping up from the old days is Paul Watkins who is an original Jet. Recruited for the inaugural season in 1986/87 he played three seasons with the Hangar as his home before retiring from the sport. Since retiring Paul has settled down and is now a family man, he’s excited to be involved in the game as having spoken to his children about his hockey it will be the first time they will get to see him play the sport he loves. Paul played 73 games, scored 8+9 and was penalised with 55 penalty minutes. 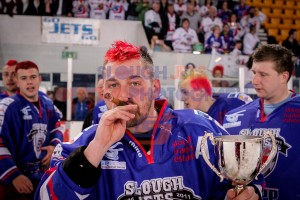 Terry Miles suffered a career ending injury in an Under 19 game, which nearly resulted in the losing of his leg. Instead of accepting that he fought back for a chance at a senior career his junior promise had very much earned him. Terry was never the biggest player in stature on the ice but he made up for that with passion, determination and speed. Despite his small size he was happy to play a physical game which resulted in a second career ending injury when he suffered a hand injury. Terry again returned to the sport, showing his sheer strength and determination. He played for his home town club until 2007 when he left to play at Guildford for two seasons. Two further seasons at Bracknell were followed by a return home where he finally got to achieve a career ambition when he lifted the 2012 Play-off trophy with his home club. Terry played 231 Jets games, scoring 34+44 and attracting 296 penalty minutes. He retired in 2013 to pursue his dream career working with animals.

Shane Walsh came to Slough in the mid 90s via Richmond and Streatham. He played three seasons for the Slough Jets from 1994 to 1997 and he continued his Slough career with the Harrier Hawks. Following spells at Bracknell and Streatham Shane retired from the game in 2010. Shane was a hard working up and down player that was known for his excellent two way play. He always came and gave a 100% and was always ready to play. He was a calm player who could always be relied on to close out a tense game. Shane played 35 games, scored 2+2 and picked up 8 penalty minutes. 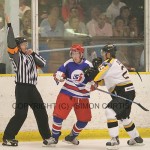 Scott McKenzie was born in Dumfermline and played a single season for the Jets, coming in from Chelmsford. Since then he has played in the Elite League before carving a reputation as a Telford Tigers legend, the team with whom he has signed for the upcoming season. Scott is an inventive forward who can make play and finish plays. His worth was shown in Telford as when the going got tough Scott stepped forward to often keep his team in the game. He played the 2005/06 season with the Jets, scoring 8+16 from 42 games with 16 penalty minutes.

Tony Nicholson is the final name to be announced today. The forward played one season with the Slough Jets, their first season. He was a very fast forward who could play an all round game. He came to the Jets from Richmond, playing the 86/87 season, and concluded his playing career back with Richmond. Since then Tony has gone on to be a top junior coach in this country. He played 28 Jets games returning 7+8 for 12 penalty minutes.

These six players will be joining the charity celebrations on July 19th, starting at Absolutely Ice with a Legends exhibition game. Tickets are available for the game priced at £10 for adults and £5 for children. There is also an evening celebration at the Copthorne Hotel and tickets for that are priced at £20 each.