Over the last few weeks a lot of work has been going on. Gary Stefan and Craig Moran have been in touch with their contacts, many players have made contact and all of that hard work will culminate in a Slough Jets Legends Day of Fun at Absolutely Ice and the Copthorne Hotel on July 19th when the Legends will take to the ice at 3pm.

David was a junior at Streatham, he was a pee wee . He also played for England U13`s even though he was born in Scotland. At 12 he moved to play at Romford juniors and was immediately picked for the Raiders, who he played for a season. He then moved to Slough after a row with management at Romford and was playing juniors when he was called up by the Jets and was the youngest junior to play and score, he scored his 1st goal against Richmond. He stayed at Slough for 3 seasons and due to travelling and work commitments he went back to Streatham again playing for the Redskins. While the Redskins folded he gave up just working and revamping mini`s. When the Redskins came back he played up until 2005 when he had to give up as he had a car accident damaging his back. He played in the Moose memorial game. He is now content at home with his partner and his two very own young prince’s Harry (6) and William (4). 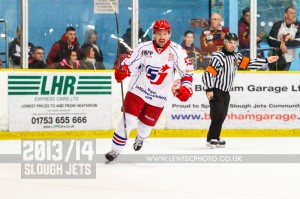 Fans favourite Ales Padelek hopes to be able to Jet back in for the occasion and suit up in his #93 jersey. “Padi” joined the Jets last season and was immediately welcomed as a fan favourite. Coming in with an excellent pedigree in the Czech Extraliga and Czech 2 Ales landed in the UK days ahead of his first Slough game. He bagged a goal in his home debut in the challenge game against Bracknell. Later in the season, with pressure mounting on him he calmly beat Gregg Rockman in penalty shots to give the depleted Jets a massive win on home ice against Guildford Flames. At the end of season awards he scooped the Coach’s Player of the Season award. Ales played 51 games, scoring 32+16 with 63 penalty minutes. 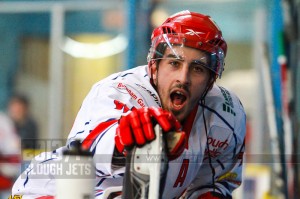 Ryan Watt has had four seasons at the club, initially coming in with Peter Russell in 2010 and staying to win the play-off trophy. He returned midway through the 2010/11 season and was part of the Premier Cup winning team. Doug Sheppard ensured his signature was on a contract ahead of the 11/12 season where he had his best season pointswise, rewarded with a second play-off win. He moved to Braehead for a chance in the Elite League but injury ruined his season so he returned to the Jets for 13/14. Ryan is one of the Jets most talismanic players in recent years, a hard working, highly skilled player who is never afraid to get involved in the game and is one of the game’s greatest modern day showmen. He had a good pre-season, picked up a suspension defending his team mates against Guildford and after scoring a highlight reel goal against Bracknell at home on the Saturday his release was ordered from above at the start of the next week proving the first of a few shocks in the season. Ryan completed the season with the Swindon Wildcats. He played 104 Jets games, returning 40+49 and missing for 338 penalty minutes.

These two will join all the other legends and leaves just one further playing announcement.

Don’t forget all the players are available for sponsorship and for further information please email Mark Denholm – mdenholm@sloughjets.co.uk