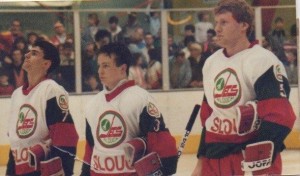 After a couple of seasons as the Assistant Captain for the Slough Spitfires Under 16’s, Gareth got his debut for the Jets on his 16th birthday becoming the first Slough resident to play for the senior squad. Sadly, the family moving out of the area meant he only got 5 games for the Jets. He has since gone on to carve himself a career in the Movie business. He had a speedy rise through the ranks to the roles of Assistant Director and Production Manager on a number of drama and documentary projects. 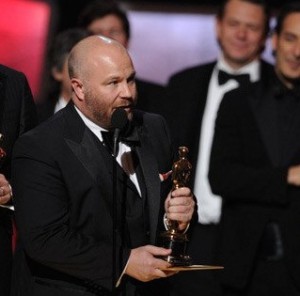 Gareth Ellis-Unwin with his Academy Award

He produced his first feature film in 2009 called “Exam” which saw him nominated in the 63rd BAFTA awards. His career took off in 2010 as Producer of “The King’s Speech”. The film was released in the UK in 2011, made with a budget of just £8m the film grossed around £250m worldwide. The film was both a box office and critics success and scooped many awards. Gareth picked up the Audience Award at Toronto International Film Festival, a Producers Guild of America award, seven BAFTAs, including both Outstanding British Film and Best Film, and four Academy Awards, including Best Film.

Currently filming in Jordan, Gareth is Exec Producing “Kajaki” , a true life story of a group of Para’s who became stranded in a minefield in Helmand Province 2006. The film is supporting the work of The British Legion and Help For Heroes and will hopefully be released later this year.

On his upcoming appearance at the Jets legends game Gareth said; “It’s a real honour to get to skate with so many Slough legends. As the first kid from Slough to play for Slough, I always looked up to these guys growing up. Stef, Charlie, Bulldog, Biddy its very cool to think I might get to fill their water bottles on the bench on Saturday 19th!”

Mark Denholm commented; “It’s a real honour for us to have Gareth playing in the game. It’s a testament to what Gary Stefan built way back in 1986 that Gareth still holds such an affection for the Jets that he is flying in especially to take part in this game. The minute Gareth heard of the game he put his hand up and said he’d be involved despite being currently working on a film.”

Players are available for sponsorship for just £20 per player. Sponsorship applications can be made by email to mdenholm@sloughjets.co.uk and sponsors will get their choice of available player in the order of their application once the completed players list is announced.