Since retiring from ice hockey after a distinguished coaching and playing career Steve Moria has launched the Mo19 leisure wear range, launched alongside his testimonial match in August 2012. Since his testimonial demand has increased for the distinctive hockey and leisure wear range and many rinks in the country have supporters and skaters proudly showing off their Mo19 t-shirts, hoodies, hats and more.

There will be a selection of Mo19 leisure wear available to buy at the game and orders can be taken for any available merchandise item in any available size or colour. The Mo19 website will be launched soon making on line ordering available. You can also visit Steve’s group on Facebook. 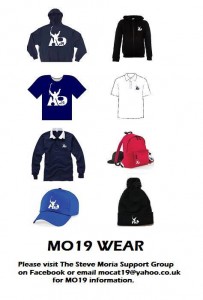 Steve came to the UK for an intended short stay first playing for Fife but went on to make Great Britain his come. He became quickly recognised as one of the top players of his generation and was soon in the Great Britain team. He played for the Jets between 2006 and 2009 scoring at 2+ points a game in every season as well as leading the Jets to a cup final and winning the play-offs in 2008. He was also the Slough Sports Personality of the Year in 2009. Steve finished his career with Jets rivals Basingstoke Bison after the 2011/12 season.

Jo Finn will be running the Mo19 table with items on display and available to buy. The latest addition to the range, the “No Pain No Gain” tee-shirt will be available to buy on the night alongside selected other items of merchandise with orders being taken for any item in any colour in any size from the range.