As the Slough Jets prepared to say their goodbyes a packed Hangar turned out to honour the Berkshire club. Players, and indeed supporters, came from around the corner and around the world to see one more Jets game as the Legends took to the ice.

From 2pm the fans rolled into Absolutely Ice ahead of the day’s festivities starting. The rink provided a barbecue and beer tent to help get the party flowing with the café catering to the younger members of the day’s supporters in attendance. 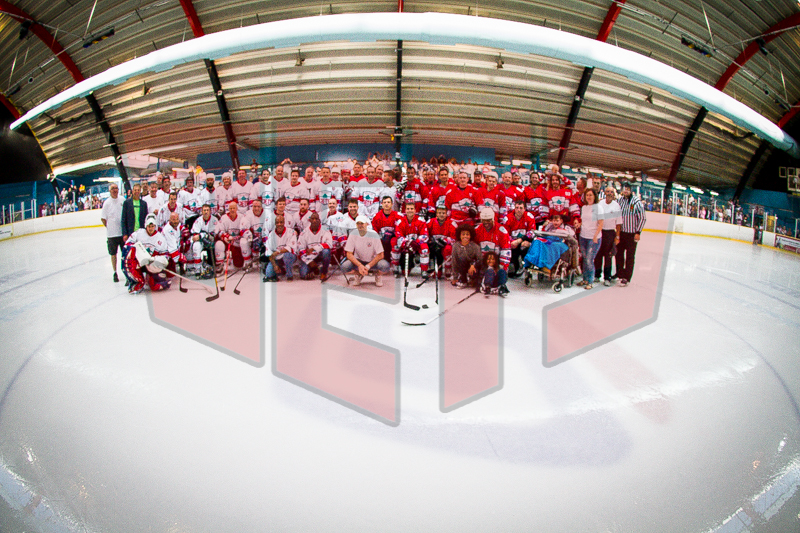 Charity partner SPICE (Special People On Ice) started the day skating on to the ice to the first rapturous applause of the day and forming guards of honour for both teams to skate on to the ice to. Player after player was announced to the generous crowd to cheer after cheer.

Ahead of the face-off the second charity partner, the Lymphoma Association, were represented in a ceremonial face-off with Jets founder Gary Stefan, Jets final head coach, Craig Moran and Paul Ferguson, the original Jets coach.

With the players raring to go the four officials, Jurijs Solovjos, Steve Tysoe, Andrew Gipps and Ian Hayden gathered the starting line ups together and the Hangar crowd settled down to watch the Legends do their thing.

With an electric atmosphere from the first face off the puck dropped and the game began. The players didn’t disappoint. It doesn’t matter how many years the players are retired or whether it’s a charity game or a play-off final every hockey player doesn’t lose that goal scoring and winning instinct.

The first goal came at just 1.49 when Steve Moria opened the scoring , re-uniting a former Jets line with Joe Ciccarello and Nick Chinn providing the assists. What followed was a goal scoring delight as Joe Ciccarello netted for 0-2 but David Smith pulled one back for the day’s allocated “home team” at 7.40. Goals continued with David Heath at 8.09 and Mark Howell at 9.16 adding 1 each to their respective score lines. Marc Long, who flew in especially for the game a day ahead of the event, scored Team Craig’s fourth goal at 12.19 and was followed by Dan Scott at 14.45 and Ciaran Long at 15.41 opening up an impressive lead from Team Craig. Stewart Tait scored at 16.13 but the final goal in 11 in the first period came from Ryan Watt for Team Craig at 19.11 to record 4-7 after 20 minutes.

Goals in the second period couldn’t match the scoring rate of the first but the quality continued nonetheless. Blaz Emersic scored 1.53 into the second period, at 26.07 Aaron Connolly netted on a rare powerplay but Team Stef came back strong with Richie Hargreaves starting the ball rolling at 26.53. Scott McKenzie converted a powerplay at 30.18 and the biggest legend on the ice scored at 33.14, the Hangar erupted in celebration of Gary Stefan netting. The second period ended 7-9.

For the third period forward Ryan Watt had swapped with netminder Stephen Wall, the forward taking over in net for the first time ever in his hockey career. After coming out the net to pounce on the first puck sent in near him Ryan Watt was beaten with his first shot by the Slough Jets all time leading scorer as Gary Stefan scored his second goal. At 50.40 Marc Long netted his second of the day but team Stef then started their comeback. Scott McKenzie scored at 51.52, Dan O’Hanlon scored at 52.35 and levelled the game at 10-10. 30 seconds later Mark Galazzi scored the go ahead goal and at 55.26 Ricky Skene, playing his final ever hockey game in Great Britain, scored the game winning goal. Despite James Nesbitt being the last man to score Team Stef held on for the win. With a minute left in the game every player left the benches and the usual 5 on 5 hockey turned into 30 on 30 as every player was on the ice for the final few seconds in the Jets history.

The day continued with a fantastically well attended party at the Copthorne Hotel. After the meals had been eaten the second shirt auctions of the day got underway, the players joined with the fans and the party got started. The Jets family enjoyed each others company, reminiscing and celebrating until the early hours of the following morning.

With the day now complete the task of counting the money, paying the bills and calculating the donations to SPICE and the Lymphoma Association.

Mark Denholm commented; “Seeing so many happy faces in the Hangar spanning the generations of the Jets was a great way for the day to start. The rink went above and beyond the call of duty in the build to and execution of the day so massive thanks have to go to Matt Schofield and his team. Players united from various places around the country and the world and put on a spectacular show. We had well supported auctions, raffles and duck throwing too before the party moved to the Copthorne Hotel. It was great to see both the Hangar and the evening function exceeding anything we’ve seen of recent in terms of support and attendance.”

He continued; “I’ve made many great friends through ice hockey, many of who were with me yesterday to celebrate and that was shared by the huge Hangar crowd who all got to celebrate among friends. Along the 28 years some of the Jets family have been taken from us but yesterday they were there in our hearts. It was a happy end to a sad situation, it showed what the Jets mean to so many people and on behalf of Gary, Tammy and Craig I thank everyone for their support. I hope we’re in a position to make decent donations to both SPICE and the Lymphoma Association following a fantastic event.”

DVDs of the game, which was recorded in high definition, are available to order for £5.00 plus £2.50 post and packaging.  To order your DVD please email Mark Denholm at the email address below.