Slough and Guildford opened their competitive seasons on the Hangar ice in front of a decent size crowd. 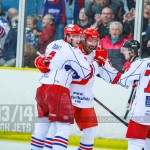 Just 27 seconds in Rick Plant found a way past Gregg Rockman and opened the visitors’ account with Ales Padelek levelled the game after 5.46 finishing from Slava Koulikov and Ciaran Long. Slough were then offered three powerplay opportunities but Guildford killed them off to end the first period 1-1.

Marcus Kristoffersson was next on the scoresheet with the go ahead goal for Guildford as 30.27 and Plant secured an 0-2 middle period at 37.18 with his second of the night. 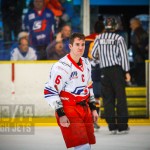 Guildford killed off an early penalty in the third period before Plant scored his hat-trick goal at 47.19, His fourth followed shortly after with Guildford on the powerplay he slotted home at 51.51 while Tomas Fojtik sat out. Kristoffersson made it 1-6 at 55.23 and with 4 minutes lose the teams came together in “afters” that resulted in 90 minutes of penalties.

Slough Jets first competitive game of the season was played on home ice as they entertained the Sheffield Steeldogs.

Slough were off to an an early lead courtesy of a Mindy Kieras goal at 2.39 and although the teams traded powerplay chances the early goal was the only goal in the first period.

Slough broadened their lead in the second period with Darius Pliskauskas scoring at 23.11 and Michael Wales scored a powerplay goal at 27.55 while Andre Payette sat out an interference minor. Greg Wood scored at 34.00 with a powerplay goal to break the shut-out opportunity but Alex Barker scored at 36.37 to restore the 3 goal margin and Slough took the second interval comfortably leading 4-1. 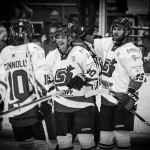 Penalty calls dominated the third period as the visitors became frustrated by their inability to get back into the game. At 45.08 Darius Pliskauskas netted his second, this one on a powerplay, nefore a freak goal added a false perspective to the scoreline when Pavel Gomenuik’s speculative dump in took a strange bounce into the net. As the teams sat out penaties no further scoring was added and Slough cruised over the line for their first two points of the season. 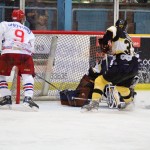 Slough Jets lined up for the first time in the season at home following a challenge match at Swindon to take on their nearest local rivals. Slough killed a double minor and a single penalty overlapping but the game’s next penalty, also to Slough, allowed Bracknell to open their scoring at 11.32 through Martin Masa. Masa’s strike was the only tally on the first period.

The middle period saw the visitors enhance their lead with Lukas Smital scoring at 24.42 and Alex Barker making it 0-3 at 30.03. Adam Greener came together with Brad Watchorn at 31.20 and this sparked the home team with Dan Davies netting at 36.43 however with just 4 seconds left in the period Peter Jasik made it 1-4.

The third period was a tough fought physical period. Martin Masa added the visitors fifth at 43.19, then at 43.45 the game stopped while both teams came together in front of the visitors bench and at centre ice. A total of 93 & 72 minutes of penalties were assessed but once again this sparked the home team into scoring. Mindy Kieras scored at 44.19, and was followed by Aaron Connolly at 44.55. Dan Davies converted a powerplay at 45.41 to pull it back to a single goal game but more penalties were the only further entries to an already busy gamesheet and the visitors took the game.

After starting the season on the road Slough welcomed nearest neighbours Bracknell to the Hangar for the home opener as the pre-season challenge series continued.

Slough dominated the game as they set up attack after attack in the away offensive zone and Jan Krajicek opened the scoring at 12.09. After a period of doubly outshooting their opponents Blaz Emersic doubled the lead at 17.54 for a 2-0 opening period.

The middle period saw Slough forge a clear lead as they netted another two unanswered goals. Bracknell managed to hold off Slough for 10.38 but Darius Pliskauskas scored to break the deadlock and make it 3-0. With just 51 seconds left in the period Emersic netted his second and completed another 2-0 period.

The third period saw Slough run away with the game. Despite Bracknell getting their first goal on the powerplay at 41.36 through Michael Pinc it was the home team who retained their dominance. Doug Sheppard scored at 44.04 and Emersic stepped in to complete his hat-trick at 48.26. The Greener brothers and James Gallazi and Craig Tribe came together and the resulting penalties gave Slough a 4 minute powerplay but Krajicek picked up a penalty and made the game 4 on 4. Sean Thompson netted at 51.46 and Slava Koulikov scored at 53:06 with a powerplay goal. Both teams changed netminders and then Sam Waller beat Slough’s back-up netminder at 54.15 but Billy Phillips scored the final goal of the game with 56 seconds left to make it 9-2

Slough’s second outing of the season was another home challenge game and this time Peter Poljacek made his debut while Zoran Kozic sat out.

Peterborough Phantoms 4
Slough came out hard and the game set off at a fast pace. The referee was involved quickly as he started penalising at just 2.46 with Slough picking up the game’s first penalty but it was the home team who opened the scoring at 8.45 when Poljacek scored in his first appearance an unassisted goal with a delayed penalty. Peterborough levelled not long after when Yardley netted at 10.47 and the same player gave them the lead at 16.26.

Slough were again fired up at the start of the second keen to rectify the deficit and Ciaran Long netted at 26.03 to level the game. The visitors converted a powerplay at 28.36 to regain the lead . Slough gave ice time to Charles Kaylor, replacing Greg Rockman at 30.35 and Joe Greener converted a powerplay at 36.09 to restore equality. Paddy Ward then put the home team ahead with 1.39 remaining the middle period.

The third period saw more fragmented play but despite Peterborough equalising with another powerplay goal at 45.30, this one from Lewis Buckman, the home team failed to let their heads drop and Captain Blaz Emersic netted the game winning goal at 58.05, catching the visitors slow coming back from a penalty and Slough bagged their first win of the season.