Slough Jets took to the ice missing players for their final regular season meeting with near neighbours Basingstoke Bison.

As with the previous night Basingstoke enjoyed the advantage in the shot count but Slough’s two netminders denied the combined 17 shots they faced while Dean Skinns turned away his 9 shots for a scoreless opening 20 minutes. 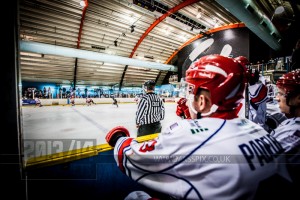 Just before the half way mark Basingstoke Bison took the lead with Tomas Karpo scoring at 29.56. Aaron Connolly quickly doubled that lead at 32.49 but with 29 seconds left in the period Kamil Tvrdek scored Slough’s first to put the right back in the game. Doug Sheppard netted Basingstoke’s third just 14 seconds later to give his team back momentum heading into the final period at 1-3.

Slough’s second goal came from man of the match Tvrdek, beating Skinns for the second time at 49.32. With Andrej Vasiljevic leaving the net at 53.50 when Ales Padelek left the game with a 5+game penalty for high sticks, Joe Myers came on to complete the game. With 2.01 left man of the match Connolly scored on the high sticks major penalty to make it 2-4 and conclude the scoring.

Slough Jets returned to their home ice for a Sunday game against the Swindon Wildcats.

Referees Dave Cloutman and Tom Gillingham took charge of the match with Jason Earl and Ilya Antonov on the lines and it was on a penalty call of delay of the game that Swindon opened the scoring with a shorthanded strike at 09.47 from Aaron Nell who finished from Hoog and Whitfield. Despite a whopping 27 combined shots in the period only the one goal was scored so Swindon took the interval holding the lead.

Back out in the second Matias Perkkio gave Swindon a doubled lead when he netted at 33.00 but Ciaran Long drew back a goal with a well taken attempt at 34.03. Swindon restored their two goal advantage with Joe Baird scoring while 2.33 remained in the period.

Slough dominated the final period with 24 shots sent on Thomas Murdy while Gregg Rockman faced 9. The offensive domination saw Frantisek Bakrlik score at 47.47 and Slava Koulikov scored the equaliser at 49.01. Slough’s player/coach then stepped forward to bury the go-ahead goal at 54.47 but Nell’s second, scored at 58.10 levelled up for Swindon and took the game to overtime. Slough suffered a personnel loss as the goal was scored when Ciaran Long received a 10 minute misconduct.

Five minutes of overtime left the scores at 4-4 so it went to penalty shots. 16 shots in all were needed to finally decide the winner. Davies and Nell both missed their shots, Pliskauskas scored and Perkkio’s miss was equalled out by Bakrlik being saved. When Hoog scored the game moved to sudden death penalties. Gomeniuk , Aldridge, Koulikov, Taylor, Kieras and Betteridge failed to score, but Barker and Melichar both scored. Wales’ attempt was saved and the game ended when Fojtik beat Rockman and Swindon took the extra point.

After the trip to Basingstoke the night before it was the Bison who made the journey to Slough taking on the Jets in the second of the home and away weekend games.

The teams got off to a physical start which hinted at the entertainment to come. Joe Greener was the first scorer of the night as he gave Slough the lead at 4.27 but Joe Miller levelled the game at 7.03. Adam Calder left the game at 11.21 with a hi-sticking major penalty leaving the home team with just 3 import but with 1.53 left in the opening period Doug Sheppard scored the goal ahead goal making it 2-1. 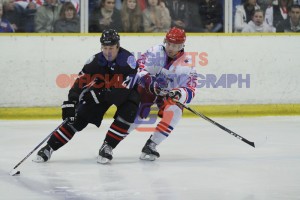 The second period saw more yo-yo hockey as a 5 on 3 opportunity for the visitors was converted to the eqaulising goal at 29.11 by Marcel Petran but at 33.58 Joe Greener’s second goal made it 3-1. Sheppard scored his second at 35.39, this one a powerplay strike making it 4-2, the same score at which the peiod ended.

The third period initially lacked the intensity of the previous two but that was soon changed as the teams got back into competition. With Slough looking to be the victors Daniel Volrab added Basingstoke’s third goal at 56.30 and the intensity stepped up another level. The visitors battled hard, forcing some big saves out of Gregg Rockman and a too many men bench minor gave Basingstoke a powerplay opportunity. Slough killed the penalty off and despite Stephen Wall leaving the net for the final 20 seconds Slough held on for their 4-3 win.

For the second weekend in a row Slough Jets finished the weekend at the Hangar, this time the opponents were the MK Lightning.

Slough Jets 5 Milton Keynes Lightning 3
Slough took an early lead at 1.54 when Joe Greener opened the scoring but Nick Poole had the game level at 7.14 indicating the battle ahead. Adam Calder’s first of the net at 11.33 put the home team back ahead and this time they held the lead until the interval. 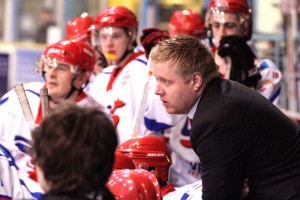 The middle period did little to separate the teams as Calder’s second put the home team 3-1 up at 25.40 but with 3.05 left in the period Lucas Zatopek pulled a goal back with a powerplay strike and the home team headed to the interval with a goal advantage.

Back out in the final period the visitors got off to a good start and eventually levelled up at 48.42 through Monir Kalgoum. With regulation time in it’s final minute Adam Calder buried the puck in the back of Hollyhead’s net with 43 seconds left to make it 4-3. Milton Keynes took their time-out at the same time but on the re-start with the empty net it took just 31 seconds for Doug Sheppard to make it 5-3 at 59.48

Slough Jets lined up at Manchester for the final time in the regular season against the Phoenix.

Manchester Phoenix 2 Slough Jets 4
Slough’s final trip to Manchester in the regular season started well with Peter Poljacek scoring at 4.50 to give the home team the lead. Blaz Emersic converted Slough’s second powerplay opportunity to a goal at 15.04 to double the lead but the home team pulled a goal back through Adam Walker at 17.32

Manchester scored the only goal of the second period just 24 seconds in while Slough were killing a penalty then conceded three powerplays of their own.

Back at even strength Slough pressured Steven Fone in the home team goal and at 43.04 Ciaran Long netted to make it 2-3, quickly followed by Andrew Munroe at 44.47. The two quick goals were enough to secure Slough the two points.