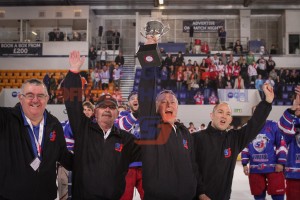 As the Slough Jets Legends Charity game gathers pace we are pleased to announce our latest recruits as off ice legends who will return for July 19th’s game.

Alan Champion, Joe Gibson, Vic Moran and Matt Plested will reunite as the equipment and medic team. Alan and Joe have both announced their retirement from their equipment manager roles following long and distinguished careers with the Jets. Both are long term members of the club, Al retiring a couple of years back and Joe reclaiming his weekends following the season that has just ended.

Vic Moran has been team medic now for a number of years and as well as dealing with the injury needs was a valuable back up to Al and Joe. He has previously also recorded the games as a coaching aid before joining the bench staff.

Matt Plested is a fully qualified sports and remedial therapist who worked with the Slough Jets in the 2011/12 season during which the team won the play-offs. Matt runs NRG Sports Massage offering Sports massage, kenesio taping and more and was so highly thought of by Doug Sheppard that he was one of Shep’s first signings when he transferred to Basingstoke Bison while he still visited the Jets once week.

We are also delighted to announce that the 2013/14 Gameday off-ice officials team will also be running the game. Richard Brown will be on the gamesheet, Vic Wilson on the clock, Sean Eckett and Steve Brown will be goal judging and we are hoping Jon Glenny will be in the penalty box.

Our multi-media team will be photographing and filming the game as we welcome back Lewis Cleveland and Lee Massey with their cameras and Ben Colyer with the video camera. Jets TV Official John Miles will be busily analysing the game to pick out the very best highlights. Game images will be available to view on line after the game at sloughjets.co.uk an video highlights will also be shown. A special DVD will also be available to buy.

The game day will have a familiar feel with Tom Nolan selling Ducks for Chuck The Duck and Karin Ingram selling 50/50 tickets too.

Mark Denholm commented; “It’s great to have all these guys on board with us ensuring the very best running of the game. Their professionalism over the years has ensured that all the jobs that needed doing were done to an excellent standard. In the case of the off-ice officials they are at their very best when you don’t notice them doing their job. It’s been a pleasure to work with them all and I look forward to their help in ensuring that July 19th runs as smoothly as any other game.”

He continued; “I’m delighted that we could reach out and welcome back John and Pauline also. Both were once regular faces at the Hangar and for one day we are pleased they will once again be a part of Slough. The number of people who’s hockey careers have been made better for their paths crossing with the Rost family is huge and it’s a great honour that we will have John and Pauline in attendance at the game.”

The game takes place on Saturday 19th July at Absolutely Ice, face-off is 3.00pm. Tickets for the game, along with tickets for the evening celebration at the Copthorne Hotel at available to purchase from Absolutely Ice reception. Game tickets are £10 and £5 for adults and children and evening tickets are £20. The game is supporting SPICE and the Lymphoma Association.