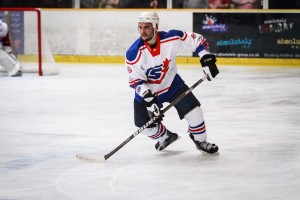 Ricky Skene has just announced his retirement from the game to pursue a move to America after an outstanding 14 year career. He debuted for the Jets in 2000/01 and after a couple of seasons moved to Guildford where he spent the majority of his career. He returned to Slough in 2003/04 for his last spell before spells with Basingstoke, Peterborough and Bracknell broke his career completion at Guildford. He played 92 games for Slough, with 2+11 and 85 penalty minutes.

Ricky’s brother Barry made his Jets debut 1 year after his sibling and he played for two senior seasons at the Hangar. His second season was a full season with the senior team and from there he moved to complete his career with Haringey Racers/Greyhounds. He played 30 games, scored 0+3 for 4 penalty minutes. Since hanging up his skates Barry now runs Skene Design.

Stewart Tait is the current alternate captain with the Streatham Redskins. He played a couple of games in 1998/99 in the BNL winning team and again a handful of games the following season but it was in 2002/03 that he nailed down his place in the senior team. He played four complete seasons with the Jets before a season with Wightlink Raiders. In 2007/08 he was back for his second spell at the Jets and after starting the following season with Streatham he was back to complete the year on his home ice. Stewart played 214 Jets games, posted numbers of 14+33 and took 292 penalty minutes. 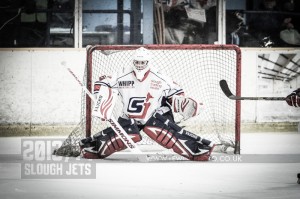 The final legend to be announced this week is the youngest legend in the game. At just 21 netminder Danny Milton will take his place in the squad. Danny started playing as a junior in Slough and also played some junior hockey in Basingstoke too. He worked his way up through the development teams to get his call up in the 2010/11 season and played in the Premier Cup winning team. He forced his way back in 2011/12 and was a part of the team who won the Play-offs. In 2012/13 he was a full time member of the senior squad and posted good numbers in the ice time opportunities he got. 2013/14 was a difficult year for the young netminder, thrown in at the deep end when a concussion kept Gregg Rockman out the game in a tough spell of fixtures for the Jets. Danny’s spell in net was ended by a broken bone but he was back again and backstopped a weakened Jets to a memorable win over league contending Basingstoke Bison in place of the injured import goalie. Danny also backed the development squad to second place in NIHL2.

On being named to the Legends squad Danny said; “I’m excited to play along some great names and looking forward to seeing some faces from the 25th anniversary game. Although I wouldn’t call myself a ‘Slough legend’ I hope to be one sometime in the future.”

These four players bring the total so far to 31 players who will start off a day of celebration for the Jets on the ice at Absolutely Ice in the afternoon and off the ice at the Copthorne Hotel in the evening, raising money for local charity SPICE and national charity the Lymphoma Association. All the 31 players are available for sponsorship for just £20 on a first come first served basis.