They’re the guys almost everyone wants to boo it seems but they’re the guys who make the game possible, we’re talking referees and linesmen. The Jets Legends are delighted to announce their officiating team who will take charge of the charity Legends game on July 19th at Absolutely Ice. 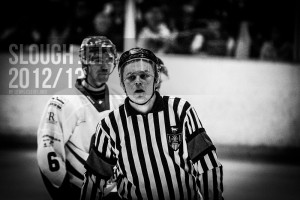 Wearing one set of armbands will be referee Jurijs Solovjovs. Jurij came to the UK from Latvia and is a popular well thought of official within the EIHA. In the mid noughties Jurij was well known to Slough fans as the “ever returning Jurij Solovjovs” working the line in nearly every Slough home game for a season. These days he has the arm bands on his sweater and referees at every EIHA level. 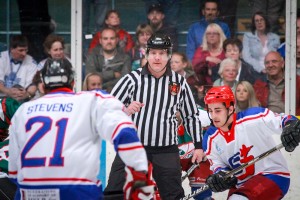 The second arm bands will be worn by Steve Tysoe. Steve is a serving police officer with the Metropolitan Police Service and makes his return to work today after a serious back operation. His recovery has been speedier than first anticipated so he is hopeful of taking his place on the ice for the game. Steve was one of the officials in the 25th Anniversary game and is very much looking forward to stepping on the ice for this celebration game. His participation is subject to medical approval at his next Doctors meeting on July 14th but we very much hope he’ll be part of the team/

The lines for the game will be run by the two local officials, Andrew Gipps and Ian Hayden. The two both learned to skate in Slough and both started their officiating careers after being Jets supporters. 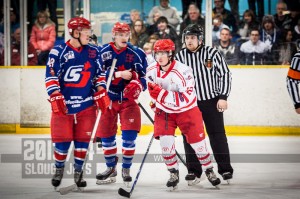 Andrew is a young upcoming EIHA official. He has lined many EPIHL games, including the Slough Jets and is also working his way up the leagues earning his arm bands too. In the season just gone he was the most photographed official in Slough but his performances on the ice were never anything less than professional. He is also a former Slough Junior Hockey player. Away from the ice Andrew is a Duty Manager at Absolutely Ten Pin. 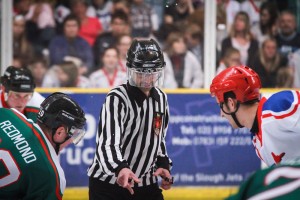 Ian Hayden has just completed a very busy year as acting Chief Referee of the EIHA. He is the assistant Chief Referee and with Mohammed Ashraff back in place Ian has returned to his normal duties but with added responsibility. Week to week, among other administrative duties Ian is responsible for ensuring that scheduled games have the correct officials allocated and is also an active official himself. Ian can be found on the ice refereeing most weekends and is highly active in the training of officials too. His knowledge of the rules and in house interpretations is second to none and he always approaches every game with a calm head.

Mark Denholm said; “We’ve got 60 players coming plus many off ice officials but without these four guys the game couldn’t take place. Week to week they do a tough job, often in a no win situation, and I think it’s fair to say there isn’t a working UK ice hockey official who gives their weekends up for the financial rewards. The majority of them are in it because they love the sport and when four top EIHA officials come out to support this event that shows their love of the game. I know it will go against the grain for most fans but please make sure you give our four a cheer on the night as they help us make our game the great day we’re looking for it to be.”

The game takes place at Absolutely Ice on Saturday 19th July from 3pm. Doors will open at 2.30pm and game tickets are priced at just £10 for adults and £5 for children. The After Party takes place at Copthorne Hotel from 7pm at tickets for that are available at the flat rate of £20

The game is celebrating the Slough Jets recently ended 28 year history as a proud professional sporting club and will be raising funds for local charity SPICE and national charity the Lymphoma Association.