Slough welcomed Bracknell to the Hangar for the second league / cup game.

Dan Davies found the back of the net at 23.04 with another powerplay goal but Rob Lamey kept the visitors in touch with another special team goal scored at 24.36 with the man advantage. Ales Padelek was the next to score with another powerplay goal at 26.50 but Slava Koulikov added Slough’s sixth goal at 28.18 and their first even strength goal of the night. The remainder of the middle period passed with no further scoring and Slough took the interval with a comfortable 6-3 lead. 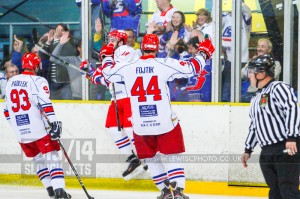 The third period saw more scoring as Ryan Watt finished an excellent move with Slough’s seventh goal at 48.21 with another powerplay goal and at 50.44 Dan Davies netted an unassisted goal to make it 8-3 and to see the end of Alex Mettam who was replaced by Tom Annetts. Lukas Smital netted at 53.56 with a consolation goal but it was too little to late and Slough cruised home for the points.

The teams played out a scoreless first period with neither team making an impact at even strength nor with their special teams.

Back out in the middle and the scoring started at 23.53 when Aaron Connolly scored a powerplay goal for the home team but exactly 3 minutes later Luke Ferrara levelled the game at even strength. Neither team could manage any more scoring in the middle frame and for the second time the teams took the interval tied up.

Slough’s Mindy Kieras gave them back the lead with a powerplay goal at 50.13 only to see Ondrej Lauko levelled at 2-2 at 53.01. Frankie Bakrlik scored the game winning goal wit 3.25 left to play and with 1.29 left Slava Koulikov made use of the home team’s time-out. Soon afer the restart Peterborough opted for the extra attacker but Lauko nullified that advantage with a penalty at 59.19. Slough converted the powerplay when King had headed back to the bench again with Bakrlik netting for a second time, this one into the empty net for a 4-2 scoreline. Slough spent the last 8 seconds killing a powerplay, the last 5 seconds of the game killing a 5 on 3 but had already done enough to win.

Slough started well with an early powerplay goal after just 155 seconds from Adam Calder but while both teams had powerplay and penalty killing practice in the first period Bracknell levelled up at 8.00 through Lukas Smital. Tom Carlon had the home team back ahead at 10.22 with another powerplay goal but with 2.35 left in the period Shaun Thompson levelled the score.

The second period saw the same intensity from both teams and Calder netted his second at 23.18 to re-take the lead but another powerplay strike from the visitors levelled again at 28.28, this one from Carl Graham. Referee Roman Szuchs assessed a match penalty for kneeing on Sam Waller at 35.36 giving Slough a 5 minute powerplay. When Smital picked up a penalty at 39.15 it took just 33 seconds to convert the 5 on 3 and Calder secured his hat-trick at 39.48.

Starting the third period with a lead allowed Slough to play a confident style of hockey while their opponents were forced to open up and look to equalise. The final 20 minutes were all the home team with Darius Pliskauskas making it 5-3 at 43.50. Ryan Watt followed up for 6-3 at 45.32 and Calder netted his fourth at 50.10 to make it 7-3. Slough’s 7th goal saw Ambler come on to replace Annetts for the final 9.50 of the game but the score didn’t change and Slough completed the win.

Undefeated Guildford Flames were the visitors at the Hangar for tonight’s league and cup match against the Slough Jets.

The home team shot away with a 2-0 early lead, started with Doug Sheppard netting the opener at 4.08 and followed by the same player assisting Slava Koulikov with Slough’s second goal. The visitors then got to show case their skills when Martin Masa pulled one back at 12.25 and Lucas Smital levelled the game with 5.38 remaining in the opener.

The second period saw neither team give an inch as they played out the period locked at 2-2 but with 2.15 remaining Adam Greener collected a roughing minor and Guildford converted another powerplay with Ben Campbell scoring at 39.06 to head to the interval a goal ahead.

Tensions continued back out for the third as both teams battled hard, Guildford to hold their advantage and Slough to nullify it but when Jez Lundin netted Guildford’s third powerplay goal of the night at 50.45, giving them a two goal margin it meant a change of tactics for the home team. Forced to open up to chase two goals to level it was their opponents who netted two more goals through Lucas Smital at 56.04 and Rick Plant at 56.43 to complete the win.

Slough Jets and Peterborough Phantoms met for the first time in competition have already faced-off home and away in a challenge series.

The game slowed up a little in the middle period as penalties started to be called but despite again dominating the shots on goal totals Slough lost the period when Joe Miller converted a powerplay for Peterborough at 31.36.

The third period saw the game see-saw as Slough’s Peter Poljacek put them back at ahead at 44.02 with an unassisted goal only to see Peterborough convert an Adam Greener penalty into their second goal when Maris Ziedins found the back of the net at 52.43. Slough continued to press hard and Emersic netted his second at 56.38 to give them back the lead. After facing 26 shots in the period Wall was pulled for an extra attacker for the final 1.12 of the game but the visitors couldn’t equalise.